Is scheduled for Saturday October 8th. I will try and participate in this event by setting up my Coulter Dob and taking some shots if the moon is visible. It's scheduled to be full on the 11th so it should be very bright that night. The forecast looks good in that it's going to be a warm day and cool evening here in the Washington, DC area.

Ambrose
Posted by AmbroseLiao at 12:57 PM No comments:

Sorry for the off-topic posting, however, I've been able to get a Google + account and want to pass along my good fortune to others who may want one. Just send an email to my Gmail account here:
ambroseliao at gmail dot com
Of course, remove all the spaces, replace the "at" with an "@" and replace the "dot" with a "."
If you don't know what Google + Plus is, it's the new social networking site that's a direct competitor to Facebook. It is a bit more open and seems to be a bit more secure than FB as well as being more capable and infinitely less burdened with ads, "pokes" and other fluff.
I'll try to get the invite out to you as quickly as possible.
One note:After giving out invites for a day or two, I've found that Gmail and Yahoo email accounts get an invite almost immediately and others either are delay or don't get them at all...
Keep that in mind when you send me the request.
Thanks,
Ambrose
Posted by AmbroseLiao at 12:25 PM 1 comment:

NEAF is this weekend!

Come one, come all to the greatest astronomy fair on the East Coast!

I only wish that I could go but some day I will.

Ambrose
Posted by AmbroseLiao at 12:23 PM No comments:

I was in need of a laser collimator to help collimate the Celestron 114EQ scope so spotted one on Astromart and grabbed it. Let's see how well the collimation has held up on the little reflector!

It's a Zhumell basic laser collimator which comes with Zhumell's dobsonian scopes.

More later,
Ambrose
Posted by AmbroseLiao at 12:47 PM No comments:

I took many shots that day however, none of them came out well. I discovered afterwards that my Coulter was horribly out of collimation. I guess it had shifted when I moved the scope into position. I'll need to recollimate it before any other shooting. None-the-less (actually quite less), Here's a shot of the moon at Perigee which is horrible, but it's something... 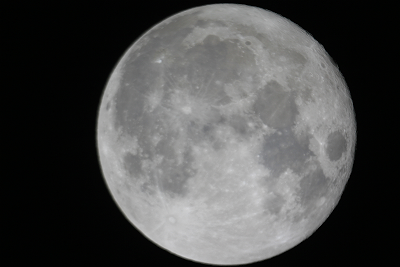 As you can see, it really was very large that night. This is a full frame shot from my 30D!

Ambrose
Posted by AmbroseLiao at 2:22 PM No comments:

I was wondering about the Space Shuttle Discovery and the International Space Station the other day and Googled them to find this site which helps track them.

I registered so that it knew where I'm located and could tell me the location of the ISS. I found that on the 8th, the ISS was going to pass directly overhead shortly after sunset at 7:20 to 7:24 PM. I also found out that the Space Shuttle Discovery was also going to be going overhead shortly thereafter. What a rare occurence and both should be easily visible!

I dropped the girls off at karate class and headed out to the field in the back of the school which unfortunately had bright sodium vapor (orange colored) lights flooding the field, but I didn't have the time to go anywhere else. I tried to find a somewhat darker spot and pointed my camera skyward. Precisely as described, Discovery came zooming up out of the West and headed directly overhead followed closely by the ISS! They could not be filed at the same time, but I got a series of pictures of them passing. 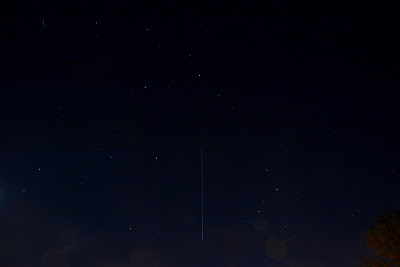 First up, Space Shuttle Discovery. The image shows Discovery travelling from bottom to top as my camera was pointing West. You can see Cassiopeia just to the right of the shuttle trail. The trail looks like it's heading straight for Mirphak. 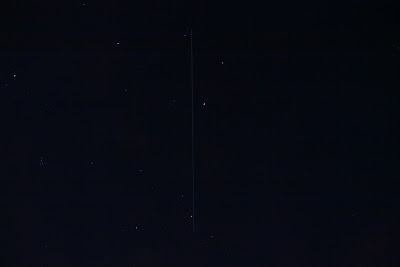 Here, Discovery is heading just past Mirphak and heading by Capella and through the constellation Uriga. You can see the Pleiades (star cluster) on the left side of the image. 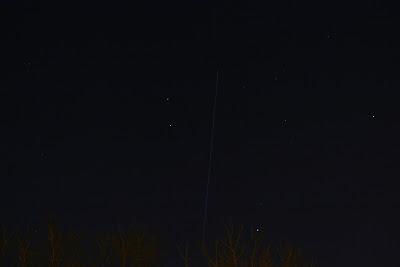 Here's Discovery going East from top to bottom towards the horizon. It's going right past Regulus. 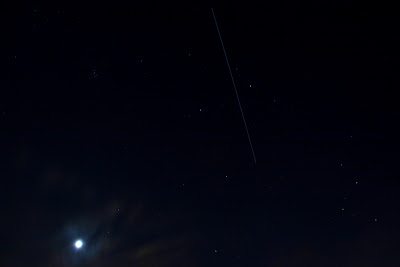 Here's the International Space Station closely behind with the glowing moon and the spreading cloud cover quickly approaching. Another half an hour and I would have been severely clouded over!
Posted by AmbroseLiao at 10:19 AM No comments:

The Names of the Moon!

I happened upon this link and thought I'd share it. It's from the Farmer's Almanac.

Full Moon Names and Their Meanings

Full Moon names date back to Native Americans, of what is now the northern and eastern United States. The tribes kept track of the seasons by giving distinctive names to each recurring full Moon. Their names were applied to the entire month in which each occurred. There was some variation in the Moon names, but in general, the same ones were current throughout the Algonquin tribes from New England to Lake Superior. European settlers followed that custom and created some of their own names. Since the lunar month is only 29 days long on the average, the full Moon dates shift from year to year. Here is the Farmers Almanac’s list of the full Moon names.

• Full Wolf Moon – January Amid the cold and deep snows of midwinter, the wolf packs howled hungrily outside Indian villages. Thus, the name for January’s full Moon. Sometimes it was also referred to as the Old Moon, or the Moon After Yule. Some called it the Full Snow Moon, but most tribes applied that name to the next Moon.

• Full Snow Moon – February Since the heaviest snow usually falls during this month, native tribes of the north and east most often called February’s full Moon the Full Snow Moon. Some tribes also referred to this Moon as the Full Hunger Moon, since harsh weather conditions in their areas made hunting very difficult.

• Full Worm Moon – March As the temperature begins to warm and the ground begins to thaw, earthworm casts appear, heralding the return of the robins. The more northern tribes knew this Moon as the Full Crow Moon, when the cawing of crows signaled the end of winter; or the Full Crust Moon, because the snow cover becomes crusted from thawing by day and freezing at night. The Full Sap Moon, marking the time of tapping maple trees, is another variation. To the settlers, it was also known as the Lenten Moon, and was considered to be the last full Moon of winter.

• Full Pink Moon – April This name came from the herb moss pink, or wild ground phlox, which is one of the earliest widespread flowers of the spring. Other names for this month’s celestial body include the Full Sprouting Grass Moon, the Egg Moon, and among coastal tribes the Full Fish Moon, because this was the time that the shad swam upstream to spawn.

• Full Flower Moon – May In most areas, flowers are abundant everywhere during this time. Thus, the name of this Moon. Other names include the Full Corn Planting Moon, or the Milk Moon.

• Full Strawberry Moon – June This name was universal to every Algonquin tribe. However, in Europe they called it the Rose Moon. Also because the relatively short season for harvesting strawberries comes each year during the month of June . . . so the full Moon that occurs during that month was christened for the strawberry!

• The Full Buck Moon – July July is normally the month when the new antlers of buck deer push out of their foreheads in coatings of velvety fur. It was also often called the Full Thunder Moon, for the reason thatthunderstorms are most frequent during this time. Another name for this month’s Moon was the Full Hay Moon.

• Full Sturgeon Moon – August The fishing tribes are given credit for the naming of this Moon, since sturgeon, a large fish of the Great Lakes and other major bodies of water, were most readily caught during this month. A few tribes knew it as the Full Red Moon because, as the Moon rises, it appears reddish through any sultry haze. It was also called the Green Corn Moon or Grain Moon.

• Full Corn Moon – September This full moon’s name is attributed to Native Americans because it marked when corn was supposed to be harvested. Most often, the September full moon is actually the Harvest Moon.

• Full Harvest Moon – October This is the full Moon that occurs closest to the autumn equinox. In two years out of three, the Harvest Moon comes in September, but in some years it occurs in October. At the peak of harvest, farmers can work late into the night by the light of this Moon. Usually the full Moon rises an average of 50 minutes later each night, but for the few nights around the Harvest Moon, the Moon seems to rise at nearly the same time each night: just 25 to 30 minutes later across the U.S., and only 10 to 20 minutes later for much of Canada and Europe. Corn, pumpkins, squash, beans, and wild rice the chief Indian staples are now ready for gathering.

• Full Beaver Moon – November This was the time to set beaver traps before the swamps froze, to ensure a supply of warm winter furs. Another interpretation suggests that the name Full Beaver Moon comes from the fact that the beavers are now actively preparing for winter. It is sometimes also referred to as the Frosty Moon.

• The Full Cold Moon; or the Full Long Nights Moon – December During this month the winter cold fastens its grip, and nights are at their longest and darkest. It is also sometimes called the Moon before Yule. The term Long Night Moon is a doubly appropriate name because the midwinter night is indeed long, and because the Moon is above the horizon for a long time. The midwinter full Moon has a high trajectory across the sky because it is opposite a low Sun.
Posted by AmbroseLiao at 9:41 AM No comments: